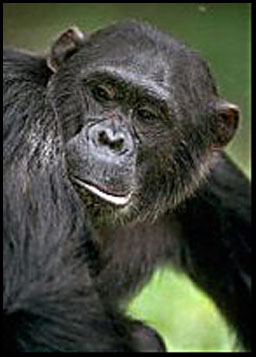 Fortunately chimpanzee pictures can still be obtained in a few nature reserves and parks in Africa. It is definitely on my wish list to photograph our closest relative in his natural habitat.

This most intelligent of apes still occurs in the wild in the following countries:

Some of the East African parks where you can see and get chimp pictures are:

A lot of what we know about chimpanzees today is thanks to people like Jane Goodall dedicating much of their lives to observing and studying these apes.

Chimpanzee Pictures Of Their Lifestyle

For the most part they follow a vegetarian diet, but will also hunt and kill other animals for meat.

Chimps live in societies of up to 80 individuals, broken into smaller “clans”. There are no definitive leaders in chimp groups, but a definite rank order. Adult males almost always dominate females, and the most respected male is the one that can put up the biggest display of strength and create the most noise by hooting and screaming. Chimpanzee photos of this in the wild are few and far between.

Conflict among clan members can usually be ascribed to a subordinate crossing the line by stealing food for example or failing to get out of the way...nothing serious.

Humans and chimpanzees share an amazing 98.6% of the same DNA.

It is interesting that chimpanzee babies develop at a faster rate than humans, at least up to the age of four. Chimps begin to walk and climb at 5 months, humans usually at around 1 year of age.

Female chimps reach sexual maturity at 12 years. When in heat she will often mate with each male in her clan and sometimes with outside males too. The male doesn’t take part in raising of the young and is quite likely to wander off to another clan if there are receptive females there.

What makes them so fascinating and enjoyable to watch and take chimpanzee pictures of has no doubt something to do with their “cuddliness” or strong sense of physical touch. Chimps spend a lot of time grooming each other and especially the young need this reassurance for their wellbeing.

We almost recognise ourselves when they stand on their hind legs to scan the area, or even run on their back legs if they are carrying something or charging in aggression. Usually however, they get around on all-fours, using the knuckles on their hands rather than the palm.

They also use tools such as sticks to “fish” termites out of their mound, throw sticks and stones to repel predators and teach each other their obtained skills, for instance cracking nuts with stones.

It’s sad then that humans are the ones responsible for their decline in numbers through ghastly practices of poaching for meat or the pet trade (approximately 4000 chimps a year are killed and captured in Africa).

At the current rate of decline in numbers, two sub-species of chimpanzee could become extinct in the next 50 years and the only chimpanzee picture you will get of them then is in a zoo.

Fortunately many people care about their conservation and there are some fantastic organizations out there doing their best to protect these extraordinary animals.