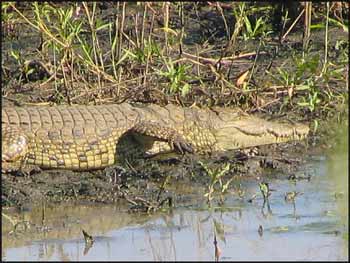 A crocodile facts list reads almost as long as the reptile itself. They are fascinating animals and seeing one on safari in its natural habitat is always a thrill.

They are cold blooded which means they use the sun to regulate their body temperature which is why you often see them lying on sandbanks or in the mud catching some rays.

The species of crocodile that you will see on safari in Africa is called the Nile crocodile even though they are distributed right across the continent from north to south.

And they are not very difficult to find in most national parks. Just drive to a reasonably large body of water and you will probably see a few of them lying on the side or partially submerged in the water.

If you wait around there awhile you might see some interesting crocodile behaviour. I've seen an elephant in a very bad mood run up to a crocodile on the bank and chase it into the water with a flapping of ears and a flick of the trunk.

You might be lucky enough to hear them vocalise. They have a surprising vocal range which includes hissing and during the mating season they will produce fearsome roars and bellows.

Another time at a dam that was busy drying up during a drought I watched as a group of crocodiles feasted on hundreds of catfish that were left thrashing in the mud by the disappearing water.

Up to 70 percent of the adult reptiles diet consists of fish but the larger ones will eat anything that comes down to take a drink at the waters edge if they can catch it so zebra, wildebeest, hippo, buffalo, antelope and even the big cats are at risk.

There have even been reports of crocodile latching on to the tip of elephants trunks and being lifted bodily out of the water and thrown onto the bank for its trouble. Probably not a mistake they will make twice.

Crocodiles do kill a number of humans in Africa every year because they are so adept at ambush hunting, lying concealed under the water and then exploding towards the bank to latch on with their jaws.

A game ranger in the Kruger National Park was attacked by a crocodile which bit into his leg and started dragging him towards deep water where it would drown him.

He only escaped death because his friend managed to pry him away from the reptiles jaws in a deadly tug of war but it took at least half an hour. The ranger was badly hurt but managed to recover and resume his duties in the reserve with some huge scars to remind him of his ordeal.

Crocodile pictures taken of the giant reptile on safari in Africa...