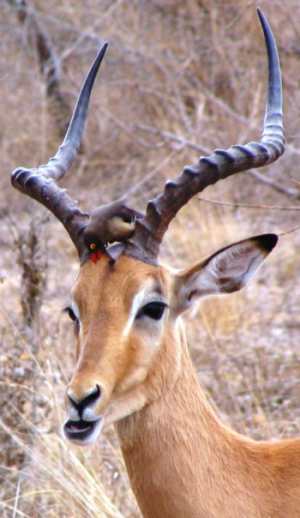 The impala antelope is a beautiful animal. Because of their large numbers in southern Africa they will provide you with ample photo opportunities should you go on a safari.

Like springbok in Namibia and Thomson's gazelle in East Africa, the impala is a "buffer" species between predators and other antelope.

In the Kruger National Park, South Africa, for instance, they are known as the "McDonalds" of the bush: they are "fast" food and also because of the black markings on their backsides resembling the golden arches of the well known fast food chain.

The impala is a very popular dinner choice for predators such as lion, leopard, cheetah and hyena.

Where To Find and Photograph the Impala

Impala are never far away from water - they have to drink at least once a day but preferably twice a day. They are quite vulnerable while drinking because they drop their guard when their head is down. Luckily the old adage of "safety in numbers" applies to a large extent.

As mentioned they are plentiful in southern Africa and in the Kruger National Park it is definitely the animal you will see most of.

They are also found in Eastern Africa, in parks like the Serengeti and Masai Mara but in smaller numbers, there the Thomson's gazelle is more abundant.

The black faced impala (occurs in Namibia and Angola) is slightly bigger than the "regular" impala animal and has distinct black markings on the face, tail and buttocks.

If you're after the extremely rare and unusual, you can try to get black impala pictures (to my knowledge these are only found at the Botlierskop Private Game Reserve on the Garden Route of South Africa), or perhaps an albino impala (I have heard of two recently - an adult in South Luangwa, Zambia and a baby in the Kruger Park). 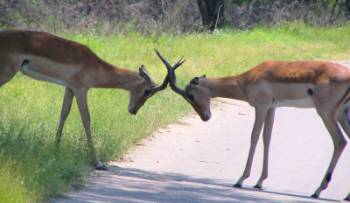 The impala antelope may seem a bit boring at first but if you hang around a herd, you will find plenty opportunities to photograph interesting behaviour.

foThe males regularly engage in mock fights, accompanied by grunts, snorts and "barks". The rutting season (autumn) is a good time to visit because then the males fight often to protect their territories.

When impalas are young (summer) they make beautiful photos. They are dainty and playful and are often seen in groups or "kindergartens".

Apart from the warning snorts they emit when they sense danger, chances are that the herd might take flight shortly after the warning signals.

Impala in flight are a beautiful sight: they take huge leaps and are gone in seconds. Better change your camera to the action setting.

Watch out for impala antelope grooming each other, or for oxpecker birds that often ride along while performing their service as tick removers (like the top picture shows).

Sometimes you just see something unusual and you have to photograph it - I once saw a young impala antelope coated in dry mud, from its hooves all the way up to its "waist", almost covering its white belly. It must have got stuck in the mud and possibly has a death-defying story to tell! It did look a bit fragile.