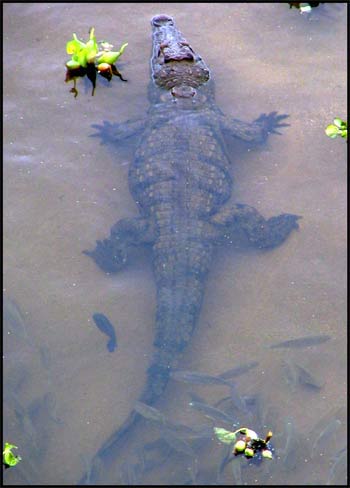 The Nile Crocodile is one of the most pre-historic looking animals of our time and it occurs throughout most of Africa, south of the Sahara desert.

I have seen many Nile crocodiles on many different occasions over the years and 90% of the time they just lie on a river or dam bank, basking in the sun or drift slowly through the water.

I was lucky enough recently to spot one catching a fish and splashing around as it was twisting in the water, swallowed it and then all was quiet once more.

The power of their bite has been measured and compared with other predators worldwide including the hyena and great white shark, and the crocodile came out tops. Maybe that’s one of the reasons they’ve been around for so long (over 200 million years)!

Usually these massive reptiles will eat fish. It also hunts animals coming to drink. Their teeth and jaw were not designed to bite and chew like lions for instance, rather a croc would drag its catch into the water where it will drown the prey.

It is not unusual for crocs to scavenge if they get the opportunity, as is the case with a most predators.

Nile crocodiles keep established territories in which males compete for dominance by attacking smaller suitors. During courtship the males will perform an elaborate courting display in the water to attract females. 4 to 5 females may simultaneously have to share one male for courtship and mating!

However sometimes courting is initiated by the female by lifting her head high out of the water and letting out growls, directed toward an acceptable male.

Copulation takes place in the water, lasting from 30 seconds to more than several minutes.

The female lays her eggs in a nest, usually situated in sand banks above high water level. She puts in a lot of preparation work to ensure the nest temperature and water content is suitable.

The eggs are vulnerable to temperature & humidity fluctuations, not to mention predators like mongoose, honey badger, baboon, otter, warthog, spotted hyena and water monitor who will dig out the eggs from under the sandy cover.

Man remains the biggest threat to these animals through habitat reduction and -degradation and poaching for the traditional muthi trade.

Small birds called plovers are a handy service provider to this reptile. When a croc opens its mouth, the plover hops right in. It might seem strange that the croc does not snap its snout shut and devour a free lunch. Instead, it lets the plover eat small, harmful animals attached to the crocodile's teeth.

It’s a win-win situation as the plover gets an easy meal and the croc gets clean teeth!

Nile crocodile pictures of this lazy reptile taken on safari in Africa...