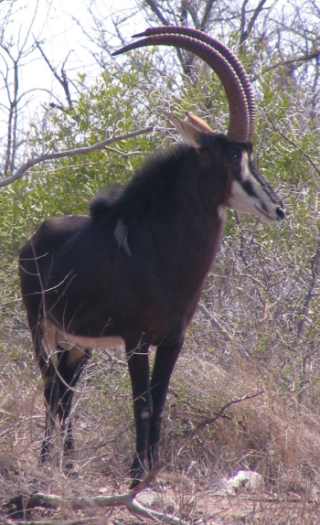 The sable antelope is a fairly rare animal. There are four subspecies: the Zambian, Common/Southern, Eastern and Giant Sable Antelope, the latter being critically endangered. For the wildlife photographer, it's a pity they are not more commonly found as especially the bulls are strikingly beautiful.

While the females are light to darker brown (they get darker as they get older), the males are dark brown to black in colour. Both sexes have white markings on the belly and face and a stunning set of curving horns. The horns on males can grow up to 1.5 metres/almost 5 feet long.

Sable antelopes are found in herds of varying sizes (depending on the population) that consist of females and young and only one bull.

Or you might come across a single bull minding his own business. In all the years I have been going on safari, it's always been the lone bull that I have come across.

Don't Mess With Me

Not just a pretty face, the Sable antelope is brave too. The male's defence strategy when attacked (or when they fight for territory) is to go down onto its knees, sweeping with its horns.

Even lions should watch out… a few have even been killed by the powerful sable antelope.

Where To Find The Sable Antelope

The best reserves to try your luck in finding and photographing sable antelope in the wild are:

In your quest to find sables in their natural habitat, you should look in lightly wooded grasslands near permanent water sources. They primarily eat grass, although in the dry season they'll also browse (eat leaves and shrubs) and they need to drink water every day or at the very least every second day.

This critically endangered antelope is quite similar in looks to the "normal" sable but has much longer horns and its facial markings are also different.

For a period of more than 20 years, it was generally thought that this sub species was extinct. Due to the war in Angola, it was near impossible to investigate their existence in the limited area where they were thought to occur (the Luando Reserve in the north of the country).

Thanks to the efforts of a small group of people, the politically sensitive area was finally accessed in the late 1990's. Their research finally paid off and in 2006 it was confirmed that the Giant Sable Antelope (also known as the "Royal Sable" or "Palanca Negra") is indeed still around albeit in small numbers.

The local people (the Songo) are fortunately also involved in the conservation of this rare antelope. In fact, it is probably thanks to the Angolan people's reverence of this animal in the first place, that it hasn't been hunted out.