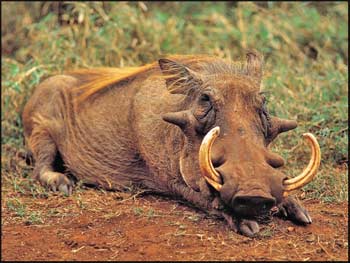 Not many warthog pictures will show the pigs of the bushveld with tusks of this size. They make a very effective and necessary defensive weapon because they are high up on the menu list of lion and leopard.

When they feel threatened they will bolt for the nearest underground burrow and slide in backwards so that they can use their tusks to protect themselves against danger.

The ideal warthog habitat is moist and arid savannah. You won't find them in rainforests, high mountains or deserts.

I have taken most of my warthog pictures in the Kruger Park in South Africa but the Masai Mara, Serengeti and Chobe reserves are also excellent places to spot and photograph these doughty animals.

In the Kruger and Lokuthula lodge in Zimbabwe they actually come right into the camps and crop the grass ignoring the humans unless you approach them too closely at which they will run away with their tails in the air.

Baby warthog are born underground in a burrow with between 2 to 5 siblings being common. 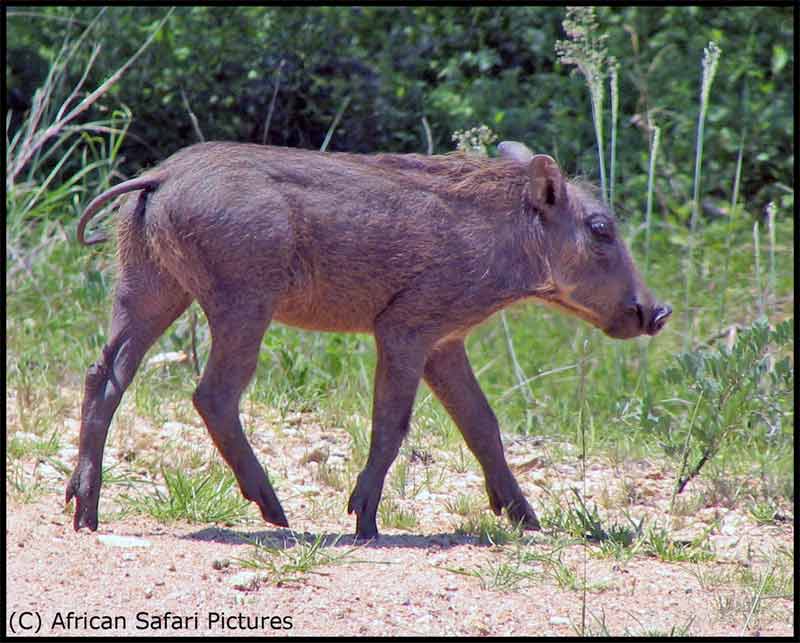 They stay inside the burrow for about 6 to 7 weeks after which time they surface and begin the endearing grazing habit of cropping grass and digging up tubers on their calloused knees.

A little known warthog fact is that a group is called a sounder and sometimes two or more sows group together with their offspring to form a sounder of over a dozen individuals.

The males roam around in the same habitat as their family but they normally only join a female group when one of the sows is in heat.

Taking a warthog photo can be tricky when they are not in the open because their short stature means they get obscured by grass and vegetation. Finding them at a waterhole is ideal because they love to wallow in the mud and you can get some interesting warthog pics of them enjoying a mud bath.

If you are lucky enough to get close to them in a camp try and get down to their level for a unique perspective which will be hard to do in the reserve itself.

Remember that when they run they they always keep their tails stiffly erect which makes for an interesting picture. The reason they do this is apparently to be able to follow each other in the long grass.