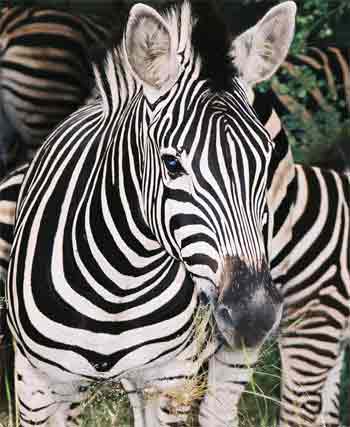 When you come across a herd of zebra on your safari, hang around for awhile and you could be rewarded with zebra pictures of mock combat, teeth baring, rolling in the dust and a wide range of other amusing antics.

The Burchell's zebra is the most common and the one you are most likely to encounter on a southern African safari as opposed to the Mountain zebra which is endemic to the high altitude regions of the Cape.

The two species can be distinguished by the fact that the stripes of the Burchell's meet on the underside of the body while the belly of the Cape zebra is devoid of them.

Zebra Pictures - How and Where

They are not hard to find on safari because they are so numerous and you will often see them hanging out with other antelope species like wildebeest and impala.

Burchell's zebra occur in most of the game reserves in southern Africa whereas the Mountain zebra can only be found in the Mountain Zebra National Park situated in the south-eastern Cape in South Africa. 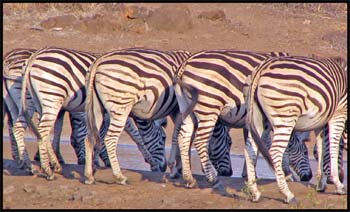 Their stripes provide some very interesting photographic opportunities especially when they bunch up together like this group drinking at a waterhole near Satara in the Kruger National Park.

And their behaviour can provide some great action photos because they are often very animated and interact with other members of the herd. Watch them for awhile and your patience will be rewarded with great photo opportunities.

During the breeding season only a single foal is born and these baby zebra are very vulnerable to predators like lion, hyena and leopard.

One of the theories about why the zebra evolved stripes is that they serve to confuse predators that are chasing them because the herd becomes a mass of blurred, intermingled, shifting stripes which makes it hard to isolate and catch an individual.

They can run in short bursts at up to 40 mph and have the potential to live for up to 35 years.