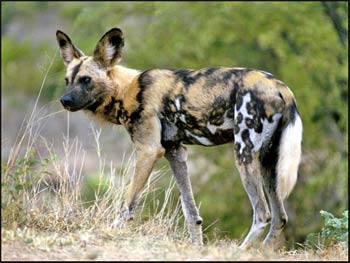 African wild dog pictures depict a dying species. They are highly endangered and their numbers have fallen from the hundreds of thousands to between 3000 and 5500 today.

The reasons for this are the degradation of their range as a result of human encroachment which means they have less food to catch and catching domestic dog borne diseases like canine distemper and rabies as contact with domestic dogs become more frequent as a result of their shrinking habitat.

They also have an undeserved bad reputation as voracious predators of cattle and as such are poisoned, trapped and shot by the indigenous people.

Finding these rare wild dogs on safari is very exciting and I have been lucky enough to watch and photograph them a number of times in the Kruger Park in South Africa.

The whole pack sometimes jogs along the road for kilometres with a number of safari vehicles trailing behind them and then you need to jostle for position to get decent photos. Much better to find them when they are at rest and you can take pictures of their social interaction at your leisure.

Another good place to find African wild dog picture opportunities is in Botswana where there are an estimated 750 of them left roaming the wilds. Selinda in the Okavango Delta has a resident pack that is seen reasonably often.

Tanzania has the largest population of packs left at around 1900 individuals.

The wild dog is a super predator, being the most effective hunter on the African plains because they record the highest number successful hunts.

They don't hunt by stealth like most of the other predators, but by teamwork and stamina.

The whole pack approaches a herd until it stampedes and then they single out an individual that might be weaker from age or sickness and run after it until it's exhausted.

They have huge amounts of stamina and can run at speeds of 66 km/hr (42 mph) for up to an hour, taking it in turns to harass the animal running in front of them.

The social nature of this animal is most strikingly exhibited once the catch is made. Each pack member is allowed a chance to eat, even the disabled ones who took no part in the hunt, and there is no fighting over scraps unlike lions who savagely jostle each other for food.

The raising of pups is also a pack effort with the males shouldering much of the responsibility. It would be a very sad day if this remarkable animal were to be allowed to slip off the planet into extinction.

Stunning collection of wildlife pictures taken on safari in Africa including hippo, chameleon, hyena, black and white rhino and more...