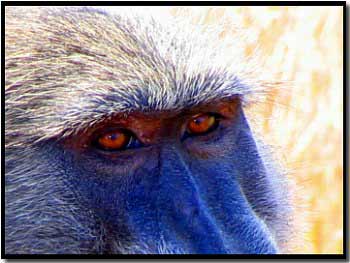 Taking baboon pictures is fascinating because the subjects are so familiar. I can watch and photograph a baboon troop's antics on safari for hours because of the things they get up to.

A lovers squabble here, a play fight there, a mom feeding her children, dad trying to look like he is in charge while havoc reigns all around him. Monkeys are so much like humans and why not? They are our closest animal relatives after all so it's not surprising that they act a lot like us. Or is that we act a lot like them?

So how to photograph baboons successfully on safari?

For me, it's all in the eyes. Their eyes are very expressive and if you can't see them clearly the baboon pictures lose a lot of their impact. It's not easy because they take a direct stare as a challenge and so they don't look directly at you for long.

And apart from that all you need is time. They will give you lots of opportunity with their quirky behaviour so you just need to wait for it and be quick on the trigger when something worthwhile happens...

Where Are The Best Places To Get Baboon Pictures?

Chacma baboons are commonplace in most of the reserves in Southern Africa so you shouldn't have a problem finding them when you go on safari there.

To get photos of other species in their own habitat to add to your African baboon gallery you will have to go to specific areas. For the olive baboon, northern Tanzania is your best bet and the yellow can be found in Zimbabwe south to Mashonaland.

The mandrill is native to western Africa and the gelada lives in the central Ethiopian highlands. The hamadryas baboon can be found in northern Africa.

Being carried around on your mothers back is a great way of getting around. Baboon mothers normally give birth to a single baby which is weaned after a year and then takes five to eight years to reach sexual maturity. Other members of the troop also help with the parenting duties. Great baboon pictures opportunities when the babies start playing. 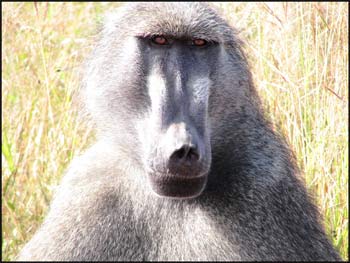 A baboon troop can be composed of between 30 to over 100 members. They group together for protection and socialization purposes and their adaptability makes them able to survive in a variety of habitats. This is one of the few African animals that is not in danger of extinction.