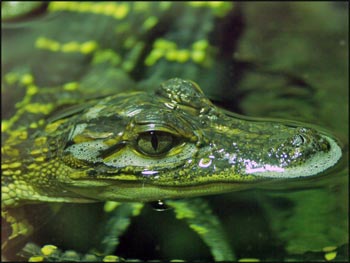 Baby crocodile pictures in the wild depict a hardened survivor because only the fittest and luckiest of them will survive the gauntlet of predators they face.

Birds, fish, turtles and even other crocodiles like nothing better than a baby crocodile snack so they have to rely on hiding away to survive until they are big enough to be taken off the menu.

I've been on a walking safari where we were lucky enough to find a nest of crocodile eggs in the sandbank. The ranger dug one out to show us but we kept a careful eye on the river because both the parents protect the eggs and were somewhere in the area. He replaced it carefully and we left before the mother came back. 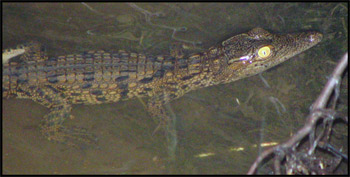 A nest normally consists of between 20 to 90 eggs and they are buried in the sand to be incubated by the sun. The incubation temperature will determine the gender of the young.

When the babies are ready to hatch they start calling which alerts their mother that it's time to dig them up.

They have an "egg tooth" with which to break out of the egg but wouldn't be able to dig through the sand without the mothers help.

She transports the hatched young to the water in her mouth and breaks free the ones that struggle to get out of the eggs in her mouth. This probably gave rise to the myth that mother crocodiles eat their young which is not true.

The babies have to catch their own food but the mother will respond to their distress calls and try to protect as many as possible. They will reach reproductive maturity at the age of about ten.

Out of 500 eggs laid in the wild only about 3 will survive to adulthood.