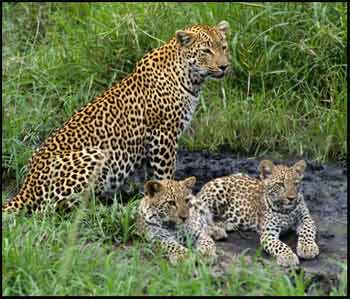 Baby leopard pictures are few and far between and for good reason. Their parents are hard enough to find on safari but finding leopard cubs in the thick bush that they favour is an extremely hit and miss affair.

A good tracker and a guide that really knows the area might increase your chances of seeing these extremely cute and cuddly felines on safari but only marginally. It's all about incredibly good luck to spot them.

I've been on safaris for most of my life and only saw a baby leopard in the wild for the first time after about 20 years. It was only a brief glimpse as it and its mother crossed the road in the Kruger National Park. Since then I have been blessed twice more with longer viewings: at Sabi Sands private game reserve and during a sunset game drive at the Kgalagadi Transfrontier Park, South Africa.

Baby Leopard Pictures - Where and How

The first thing I did was to take as many pictures as I could. You never know when, or if, the opportunity will present itself again so you have to make the most of it while it's there.

The South Luangwa National Park in Zambia and the Sabi Sands Private Game Reserve in South Africa seem to provide the best likelihood of a rare leopard cubs sighting but to be honest your chances of not seeing them seems to be just about the same everywhere.

Leopard litters average two cubs and there is no distinctive breeding season although some researchers have noted that births peak during the birth season of impala, their main prey.

They are born blind after a gestation period of 90 to 105 days and weigh about two pounds at birth.

The mortality rate in the first year is high and has been estimated to be between 41 and 50% annually. So one of the baby leopards in the picture above is probably not going to make it.

The cubs will stay with their mother, learning all the skills they need to survive until they are between 13 and 18 months old. There may be a delay if the prey in the area is abundant or if their is already a resident leopard in the adjacent territory.

Siblings may stay together for several months after they leave their mother before separating. In the wild they live to be between 10 and 15 years old and in captivity they can reach the ripe old age of twenty.

Leopard picture collection of this beautiful African cat in a variety of poses...