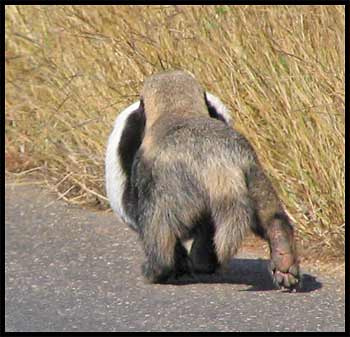 As can be seen in this Badger picture, the African Honey Badger, or Ratel, can be described as a miniature tank. There is a saying in Afrikaans "as tough as a Ratel"... they are said to be braver than even a lion.

It stands about 30cm (12 inches) tall and has a distinctive appearance: greyish white upper section and black lower half including belly, limbs and tail. The dividing line can be clearly seen in the youngster being carried on the above photograph.

The Ratel weighs about 12kg but is powerfully built, has sharp teeth and dangerous claws. It sports a loose thick and tough skin which makes it hard for enemies to inflict any serious damage.

I managed to snap the badger picture on this page on safari in the Kruger National Park in South Africa.

I was very lucky to get the opportunity as this is the first and only Ratel I have ever seen on numerous trips to national parks all over Africa. (only saw it for a few seconds after which it darted off into the long grass and disappeared).

They have an extensive range throughout Africa from the Cape of Good Hope right up to Southern Morocco so they will be around in most of the safari parks in Africa. The challenge is to find them though.

They are mostly solitary animals which live in aardvark burrows and are mainly nocturnal.

When they feel cornered, they will try to ward off aggressors by exuding a foul-smelling excretion to try and drive them off.

If that doesn't work, they will get aggressive towards other carnivores - even lion and man - when they can most accurately be described as fearless, ferocious fighters.

However, if not threatened, chances are better that you'll spot them trotting along, minding their own business - just like the one on the picture above.

Their diet consist of small animals, insects and snakes. They use their long, curved claws to flip over stones, to rip bark off dead tree trunks and to dig rodents out of their underground burrows in search of their dinner.

This may make them sound like carnivores, but they also eat roots, bulbs, fruit and of course honey - as the name suggests.

Honey Badgers follow the honey guide bird, which does what it says on the label: it leads the Badger to honey. The Badger will then burgle the bees nest and eat away, immune to the bee stings due to his thick skin and well-padded feet.

The honey guide bird gets its reward by feasting on grubs which it couldn't have gotten to without the help of its robust friend taking all the punishment. A perfect relationship.