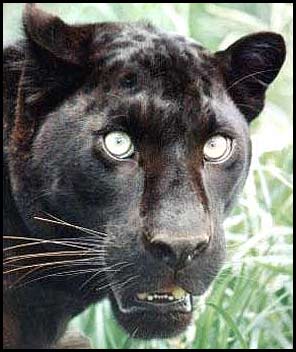 If you see a black leopard picture chances are it was taken in a zoo. It is very rare to see black leopard on safari. The last wild sighting was near Lydenburg in South Africa (outside a national park) in 2001 and the last one before that in the 1960s on Mount Kenya.

But what a beautiful animal! When you look closely you will find they are not a solid black, but have the usual rosette coat of “normal” leopards, it’s just hidden as the background colour is so dark that it is not immediately visible.

Apart from the colour of its hair, the black leopard is exactly the same species with the same behaviour as the “normal” leopard seen in Africa. As in the case of the white lion and king cheetah, the variation occurs when both parents have a certain recessive gene. The colour variant in this case is called melanism.

Therefore a black leopard, sometimes referred to as panther although that is not technically correct, could be born among a litter of normal-coloured leopards and from normal-coloured parents.

I have seen one in a zoo (Isle of Wight, England) and I must say it is an awesome animal. One can always dream of seeing a black leopard in the wild some day!

More information and pictures of leopard climbing a with a gazelle in its mouth, their habitat, baby leopard pictures and more...

Is the leopard cub the cutest in Africa? Check the baby animal pictures gallery to decide...