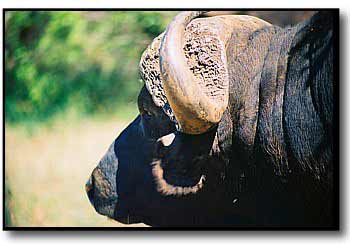 Better to take your buffalo pictures on safari from a safe vantage point. These large animals can be very aggressive when they feel threatened and with up to 800 kg of muscle and bone backing some of them up it's safer not to argue.

They are known to hunters to be one of the most dangerous of the "big five" animals and stories of wounded buffalo circling around and actively hunting the hunter are common.

They also don't tolerate lions close to the herd and will sometimes chase and try to kill any lions in the area.

Buffalo Pictures on Safari - Where and How?

I have found vast herds of them (est. 2000) in the Kruger Park in South Africa and they are also common in Hwange NP (Zimbabwe), Masai Mara (Kenya), Ngorongoro Crater (Tanzania) and Kafua NP (Zambia).

They prefer savannah woodland area and bushveld close to water where they can wallow so you will often catch them on the way to or from a waterhole. They need to drink daily to sustain their huge bodies. 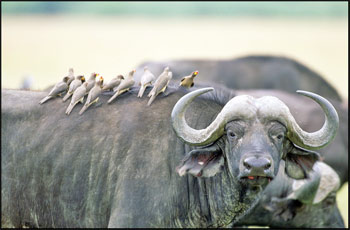 Getting photos of them while they are milling around in a massed herd are sometimes surprisingly difficult.

I've found that it works best to single out an individual and concentrate your photographic efforts there.

Because of their dark colour exposure can be tricky in bright sunlight. Use bracketing to make sure that you get it exactly right.

You will have the opportunity to get pretty close to them in your safari vehicle because they often take ages to amble across a road and then turn to look at you with mild interest.

Buffalo are a very sociable and non-territorial animals and both male and female herd together with the males being dominant. Males leave their clans as adolescents at three years of age and form peer subgroups still attached to the main herd but staying clear of breeding bulls. Bulls that are past their prime leave the herd and associate in bachelor groups of up to fifty animals.

Healthy adults don't have much to fear from predators as even a lion pride will hesitate to take on the herd. Leopards are a threat to the calves and both hyena and lion will make an attempt on an injured or sick individual.