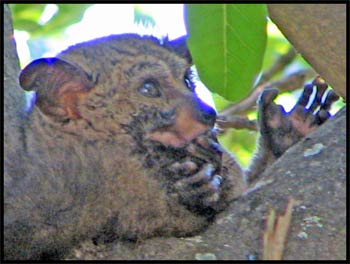 This Thick-tailed Bush Baby picture was captured at the Satara Camp in South Africa's Kruger National Park. It was dozing off in a tree right amongst parked cars and visitors and this offered plenty photo opportunities of it both awake (barely) and asleep.

They are not often seen during daytime, precisely because that is when they sleep in hollows or nests in trees.

These nocturnal cutesies have very good night vision, as their large eyes suggest, enabling them to jump around in the treetops in the dark.

If you are lucky enough to find one during the day take lots of pics because it won't happen very often. You are much more likely to see them on a night drive through the bush squinting at you through the beam of your torch.

There is also the Lesser Bush Baby, smaller than the Thick-tailed, and also with a thinner tail.

Their behaviour is similar, but diet slightly different. The Lesser Bush Baby loves gum from Acacia trees and insects, which it catches in both little hands.

Two young are usually born, and the mother will take them along when she goes on her nightly escapades, "parking" them on branches near where she is foraging.

The hands and feet of both types of this species were specially designed to grip the branches along which they move. Look at their long fingers and toes. Additionally, their palms and the tip of each digit are cushioned by an enlarged, soft pad.

The name derives from their call which sounds very much like a small child screaming which can be really eerie on a dark bushveld night.