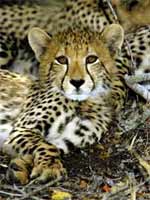 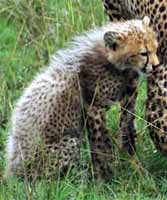 Getting cheetah cubs pictures on your safari takes more than a little luck. But the Masai Mara and Serengeti reserves in East Africa and the Etosha in Namibia will provide some of the best opportunities.

All these national parks are reasonably open when it comes to vegetation (less bush and tall grass) which makes it possible to see for longer distances which in turn improves the chances of seeing baby cheetah.

Once you've found them on safari, you're confronted with the dilemma of how best to photograph them.

I've found that some of the best baby cheetahs photos are obtained when they are interacting with their mom or their siblings, or something in their environment like a blade of grass or an insect. Keep an eye out for moments like that. 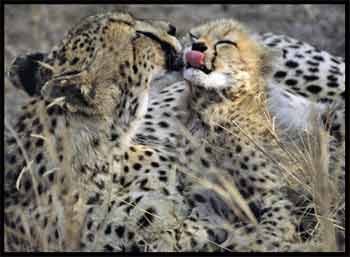 And if you can capture images that show the greyish long hair that runs along their back (called a mantle) all the better.

It's thought that the mantles function is to provide camouflage protection from predators and some even go as far as to say that it's meant to make the cheetah cub look like a honey badger which is so aggressive that not many predators will tangle with it.

In any event, they need all the protection they can get. After the 90 days/3 months gestation period, they only weigh between 250-300 grams at birth and are about 30 cm long.

The mortality rate is very high. Studies conducted in the Serengeti in Tanzania disclosed that only 10 percent of cheetah babies survive past the age of three months.

This is one of the reasons why the average litter produced normally contains 4 to 5 cubs.

The cheetah mom takes on all the duties of parenting herself. She has to teach her babies to hunt and avoid other predators in 18 months because at that time she leaves them to fend for themselves.

All the siblings stay together for another six months after which time the female cheetah leave the group to become solitary while the males form a coalition which lasts for life.