Cheetah fact is abundant in books, TV programmes and the internet. But change your point of view and see the beauty of their place in nature, how they are perfectly suited to their habitat and have their own unique role to fulfil in the circle of life.

The spots on a cheetah are solid black and the pattern on each cheetah unique.

Compared to lions whose shoulder height is about 110cm (43 inches) and weight up to 225kg (496 pounds), you can see they are relatively small.

More cheetah information is that they do not have retractile claws like the other big cats. This provides them with better traction when they run at speed.

Although they cannot roar, they have a wide range of other sounds – chirping, bleating, hissing, barking, growling and also purring when restful.

Cheetah Fact: The Fastest Land Animal Has To Eat Fast Too

They are diurnal and hunt small or medium-small ungulates, rabbits and large birds on open plains with fairly even ground.

I can't help but feel sympathetic towards cheetahs - they can’t sustain these high speeds for very long so half of their hunting attempts fail. 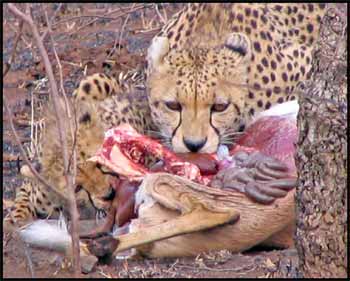 When the hunt is successful, they often have no choice than to give up their kill as they are unable to defend themselves well against bigger, stronger predators like lions and hyenas.

Lesser known cheetah info is that even vultures can chase a cheetah family off a kill. We saw this happen in the Kruger National Park in South Africa.

I saw again how there is a perfect balance in nature. The cheetah and her two cubs ate their fill but weren't given time to hang around and finish the impala off, like lions do for instance.

On the cheetahs' second sitting, vultures started plopping down within metres of the kill, then closing in. The mother cheetah chirped softly to her cubs as if to say "take your last bites, kids... we have to move on".

The three of them walked off unwillingly and seconds later the impala carcass was covered in vultures, ripping off strips of meat and the cheetah family long forgotten.

Another cheetah fact is that females usually live alone unless they have cubs. They don't give birth in any specific season and their litter size is usually 3-4 cubs.

The life expectancy of cheetahs in the wild is 12-14 years.