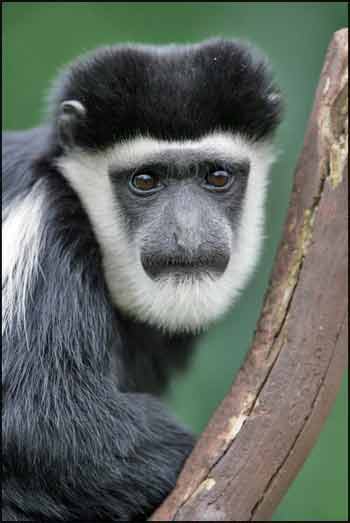 The most commonly photographed of the lot is the black and white colobus monkey. They live in forests and also bamboo stands. It is difficult to photograph these primates as they spend most their time in trees – unlike other monkeys they hardly ever descend to ground level.

High above the ground they leap from branch to branch, swinging up and down while holding onto the branches with their thumbless hands, and flying downwards with their long hair and thick tail almost forming a parachute-like support.

Their diet consists mainly of young leaves, but they also eat certain insects.

They are quite peaceful and don’t fight during courting and breeding. A male goes with the female when she withdraws from the troop to give birth. They return the day after birth, with the infant clinging to the underside of its mom and keeps doing that until it is about 8 months old.

Black and white colobus babies are born all white, and start getting the black colour after a few weeks. During this period other females will often take the baby from its mother, to hold it for a while (just like human behaviour).

The leader males “roar” to advertise their territory, which he and his troop of up to 200 members occupy. The troop uses a variety of other vocal sounds e.g. snorting to make alarm, or squealing by the little ones when they want to be picked up by their mothers.

Most people go on safari in East Africa if they want to see wildlife. You are then most likely to see the black and white colobus monkey. They occur in Rwanda, western Uganda, Tanzania, Kenya, Ethiopia, southern Sudan and eastern Congo.

Colobus Cottage on Diani Beach, Kenya, runs a protection programme for the Angolan species and have habituated troop that can be visited by the public.

There are also different types of red colobus monkey in the forests around the Udzungwa Mountains of Tanzania, Zanzibar, western Uganda and in Kenya. It is listed as vulnerable and much rarer in the wild than its black and white mates.

The Olive colobus monkey has an orangy fur. It occurs in west Africa. They are not extremely social monkeys but have a strange habit where the mothers will carry their young in their mouths.

The black colobus monkey is completely dark of colour and occurs in Gabon and Cameroon.