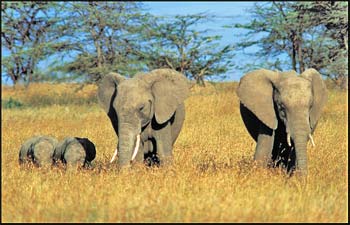 An important piece of safari elephant information to remember is that even when you’re inside a vehicle this is one animal you don’t want to mess with. At an adult weight of between 4-7 tons (females 2.5-3.5 tons), the African elephant is the largest land animal on earth today.

An imposing sight with their massive ears, gleaming tusks (males and females have those) and versatile trunks, they are 3-4 metres tall (females 2.4m-3.4m) and their life expectancy in the wild is about 50-70 years.

The gestation period of an elephant is 21.5 months and calves weigh about 120kg at birth. Baby elephants, like other mammals, suckle at their mother’s breast and have to be taught how to use their trunks to pluck leaves and branches, pick things up, use it as a super-size straw to suck water in and spray into their mouth and to trumpet!

The babies are treasured by the rest of the family who will all help when they fall over in water or struggle to climb out at a river bank.

Cliché’s are so-called for a reason and so it’s also true that elephants have fantastic memory and high intelligence. This retained elephant information is necessary for their survival: season after season they return to the same waterholes and teach their young where to find food and water in times of drought.

Elephants live in sometimes huge maternal groups for life. Males most often split off on their own or pair up with other loners but may visit the maternal groups from time to time for feeding and breeding purposes.

Eat 100kg a Day and You Would Also Be Huge

Talking about food and water, elephants are herbivores and one of the amazing elephants facts is that a single adult can chomp 48-96kg of grass, twigs, bark and other vegetation every day and drink as much as 225 litres (50 gallons) of water!

Water is not only for drinking but also for bathing, splashing and playing around in. I once saw a group of all ages cross a shallow riverbed and the teenagers were literally trumpeting with joy and rolling around in the cool water.

Joyce Poole, one such an expert, was away for some time during her studies at Kenya’s Amboseli Park and when she returned to observe a group she has spent a lot of time studying before, they approached her with a seeming excitement and sniffed at her inside the vehicle as if to say “welcome back”, similar to the greeting ceremonies they have for elephant friends.

Whether animals experience emotions or not is an old debate in the elephant information science nature industry. Decide for yourself next time you observe elephant behaviour or get the chance to look (safest through binoculars!?) closely at their eyes which seem to be indeed, the windows to their soul.

Spotting elephants on safari is not very difficult because of their sheer size. Having said that, dense vegetation can easily hide these giants so look out for fresh dung on the road or broken trees and branches lying across the road. In open savannah or river beds you should be able to watch them at your leisure as they graze or dig for water.

Beware of flapping ears (a possible sign of annoyance) and don’t get too close - especially to lone males in musth or mothers with little ones - you’re in their territory and they have right of way!

I have been on the wrong end of a few mock charges on safari which can be pretty frightening but are normally only a warning.

Elephants communicate by rumbling sounds, usually at a lower frequency than humanly audible which is a piece of elephant info not many people know.

The African elephant is officially classified as endangered, the main reason being ivory poaching. You can help fighting for their future by never buying any ivory products. Habitat loss plays another big role in their decline of numbers.

The above elephant information applies to the savannah elephant. There is also a sub-species of the African elephant, the forest elephant, which is smaller and also has some other physical differences.