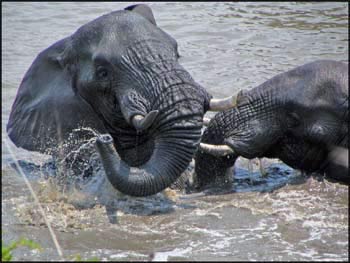 Many people have an elephant safari on their wish list of holidays. We find this biggest land mammal very intriguing as it has many levels of emotion and of course the fantastic memory everyone always talks about.

There was a time when the future of the African elephant was under serious threat. Their numbers spiralled down alarmingly (dropped by 50%) in the 1980’s through poaching and smuggling for the ivory trade.

However thanks to the banning of international trade in elephant products and ivory by CITES in 1989, elephant numbers stabilised and even increased to a healthy population today.

Where To Go On An Elephant Safari

As the elephant is one of the “big 5”, it is on most people’s wish list to see when they embark on an African elephant safari. Don’t fear as they are found in most parks in Southern and East Africa.

In South Africa there is even a park named after them, the Addo Elephant National Park, which was established in 1931 when only 11 elephants remained in the area. It has grown from strength to strength and today there are over 420 gentle giants, along with a wide variety of other game.

Incidentally in this park you can aim to spot the “Big SEVEN”: elephant, rhino, lion, buffalo, leopard, whales and great white sharks.

The very north-western corner of Zimbabwe (as at Aug 2005 fine to visit - the political situation of the country seems to have minimal effect on Vic Falls and surrounding area), where it meets with 3 other countries (Namibia, Botswana and Zambia) is an area well known for its seasonal concentrations of elephant, which means you’re very likely to see large herds visiting the waterholes.

The Chobe National Park (Botswana) are also known for its large herds of elephants.

Whether you see them through your binoculars or up close in a safe environment, one thing’s for sure: you won't walk away the same!

Although the elephant can be a very dangerous animal, they are also very intelligent and have extremely strong social structures. When you see how an older elephant helps a baby up, or how they touch each other with their trunks, you’ll see what I mean.

Elephant pictures gallery of an elephant calf, the elephant's trunk and elephants mating in the water, all taken on elephant safari trips in Africa.