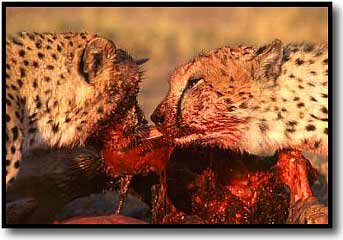 Getting photographs of the endangered cheetah in the wild is not easy but not impossible either.

This beautiful spotted cat has been on the endangered species list since the 1960's. The main reasons for its threatened status are:

Conservation of the Endangered Cheetah

Fortunately a number of projects/centres have been established to protect and also breed the fastest land animal. In South Africa alone, there are at least three:

These centres play an important role in the education of people about endangered cheetah as well as the protection of the species. They have to be careful with their work to ensure interbreeding doesn’t take place.

Another fundamental organization is the CCF (Cheetah Conservation Fund), established in 1990 in Namibia. Its mission is to "secure habitats for the long-term survival of free-ranging cheetah and their ecosystems through multi-disciplined and integrated programmes of conservation, research and education".

Thanks to the good work that’s been done, the cheetah’s status is now “vulnerable” (better than “endangered cheetah”). If serious conservation efforts continue, the chances of cheetah extinction will become smaller and smaller.

It’s important to protect predators like the cheetah, as without it the natural ecology will be disturbed and an imbalance (too many antelope, leading to overgrazing) in nature will occur.