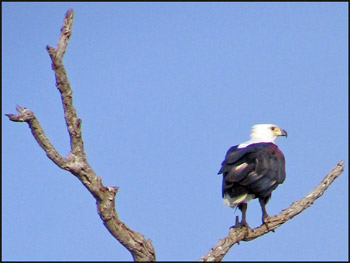 This fish eagle picture shows what it looks like but it's the haunting call of this bird that can be described as the the sound of Africa. You can't get a sense of it in the photo of course but it has an unmistakable and characteristic call - also made in flight - which evokes romantic feelings about the continent.

It has a very distinct appearance: a white head, neck and tail with black and chestnut body and wings. It looks a lot like the bigger bald eagle found in the USA. The female is larger than the male. 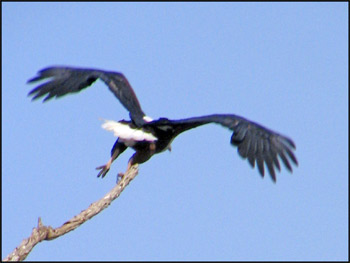 The Fish Eagle is widely distributed throughout Africa south of the Sahara and can be found anywhere there are fish to be caught: rivers, lakes, dams, estuaries - even the open coastline. It will often sit perched in a dried tree like the one above and scan the water for its next meal.

The picture usually portrayed in wildlife films is of this majestic bird swooping down to the water level and grabbing an unsuspecting fish in dramatic motion and flying off to a nearby tree to munch away.

This isn't always the case though - they will happily feed on dead or stranded fish and often rob other fish eating birds of their prey.

I was recently sitting at the Sunset Dam in South Africa's Kruger National Park, watching a Giant Kingfisher make a catch. As it was about to start breakfast, a Fish Eagle which must have also watched the episode, approached and gracefully made off with the Kingfisher's meal.

Other food include rats, the young of some bird species and flamingos (East Africa). A large Fish Eagle was even reported to have caught a small crocodile! Unexpected of this noble looking bird, they will also feed on carrion from time to time.

The inside of the Fish Eagle's feet are rough and spiky, so it can hold onto its slippery prey. If the fish is too big for them to lift, they may paddle themselves to the shore, using their wings.

Fish Eagles make their nests out of sticks and twigs high up in trees or sometimes on a cliff edge. There are usually two eggs and the incubation period, which seems to be handled by the female only, is about 48 days.

The extent of the Cain and Abel battle among Fish Eagle chicks is unknown. Although there is fighting between siblings, it doesn't seem to be too serious. Even three chicks could survive the nest.