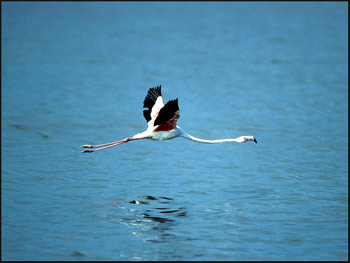 A flamingo picture that shows a single bird is pretty unusual because they normally congregate in massive flocks consisting of thousands (sometimes millions) of individuals.

They feed by means of dipping their beaks in the water using their long necks and then swinging their head back and forth to filter out any shellfish or algae present. 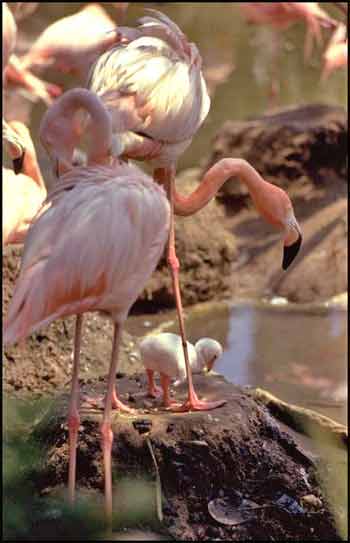 They have a very elaborate courtship ritual which involves a lot of neck twisting, head bobbing and dancing.

Nests are constructed out of mud and a single egg is laid on top of the nest. Very rarely are two eggs laid in a single nest.

The eggs will take between 28 - 30 days to hatch and both parents participate in the brooding and chick rearing process.

The chicks feed on food secreted from glands situated in the upper digestive tract of the adults so this is not regurgitated food. The chicks start copying the adults feeding movements in about ten days but they are only able to feed themselves fully within 60 days.

They will take on the coloration of their parents in about three years.

The parents have been known to abandon their chicks and nests when they are threatened by predators, water levels are low or disturbed by aircraft or humans along the shore.

Flamingos are threatened in Africa because the lakes that sustain them are becoming increasingly polluted by man and they are particularly vulnerable to contaminants because they spend so much time sifting the water.

Their life expectancy in the wild is normally twenty years and in captivity they have been known to live for up to forty five years.