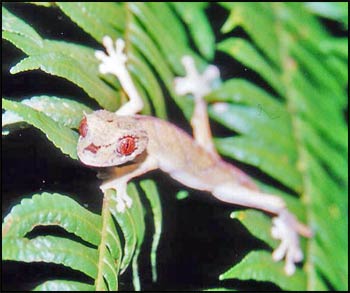 You can obtain a gecko picture in many different countries, as these small lizards are found practically worldwide, especially in the tropics and sub-tropics.

There are many different species of gecko, for example in South Africa alone there are 90-100 types.

Geckos are harmless lizards with short, flat bodies covered in small bumpy scales. Most kinds grow 10-15cm (4-6 inches) long, including the tail. Extremes are as small as 5cm (2 inches) or as long as 30cm (12 inches).

The toes of most geckos end with pads that have thousands of hair-like bristles which stick to most surfaces, which is why they are often seen on walls, windows and ceilings. I have seen them on many an ablution block window on camping trips.

Like other lizards, geckos lose their tails (it breaks off) when they are attacked or involved in a brawl and a new tail grows in its place. Unlike other lizards however, the gecko might lose only part of its tail and not necessarily the whole one, depending on the severity of the threat to it.

Unique in the lizard family, most gecko species can make chirping, squeaking or barking sounds. They usually vocalise while hunting, or to communicate with each other.

Where To Find Gecko Pictures Opportunities

Most geckos are active at night when they hunt insects with their thick, wide tongue. In Madagascar you do find a diurnal gecko, which is brightly coloured and has round pupils as opposed to the usual slit-shaped pupils.

They have large eyes especially suited to better sight. Talking about their eyes, they sometimes use their tongue to clean the membrane on the eye, like a windscreen wiper – an excellent photo opportunity, but you have to be quick.

During the day they like basking in the sun, but mostly hide away in a rock crevice, underneath the bark of a tree, in tree hollows and also holes in sandy ground.