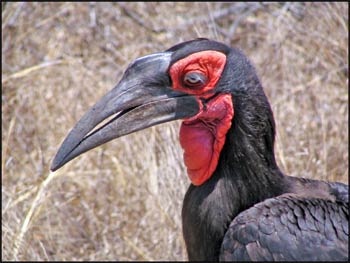 Ground hornbill do fly and sometimes sit in trees, but most often I have seen them on the ground ... the name is apt. These birds are big (90-100cm/36-39 in) - about the same size as a turkey - and are very easy to spot.

This interesting bird has a red face and throat with pitch black feathers covering the rest of the body which provides a wonderful contrast for photography.

Males and females look the same, bar a blue patch on the throat of the female.  They both have beautiful flirtatious eyelashes and are quite inquisitive.

The first time I saw a juvenile, I thought it was an adult coming down with the flu, as its face and throat was a pale yellow colour.  It didn't take long to realise it was fit as a fiddle when it grabbed, with much vigour, food from its father foraging nearby. It must have been a teenager!

Where To Look For Ground Hornbills

Distribution is mainly in the eastern parts of South Africa, also in Kenya, across the northern Kalahari (incl. Namibia, Botswana, Zimbabwe) to Angola and the DRC. Their habitat is savannah, woodland and grassland near wooded areas.

They are usually seen in pairs or small groups and stay within sight of each other. They waddle slowly over the ground looking for insects, frogs, small reptiles, rats and mice. Also part of their diet are seeds and nuts found on the ground, which they toss in the air with their long sharp beaks and catch to swallow.

This large bird nests in holes in trees or cliffs. Two white, rather rough eggs are laid. While the female hatches the eggs, the male will tirelessly feed her and they will sometimes swap places.

This species is threatened in many parts of its range.

They make a deep booming sound, especially first thing in the morning or when they lose sight of each other while hunting for food.

I recently came across a small group of ground hornbills in South Africa's Kruger National Park, and their early morning choir song provided entertainment for a good five minutes - quite weird and wonderful!