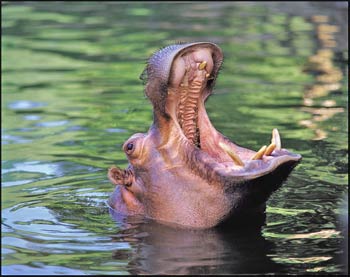 Hippo pictures opportunities will present themselves regularly on safari in Africa. They abound in many of the larger pools and rivers. Wait long enough and one of them will eventually yawn widely for you to snap.

Hippo Pictures - How and Where On Safari

Because they spend a lot of time in the water to avoid being burnt by the sun, the majority of your safari hippo photos will be of them wallowing in a pool or river.

Water has a highly reflective surface so you need to be careful because the camera will compensate for the brightness of the sun around the hippo and then the animal itself will be underexposed.

You get around this by making use of bracketing. That is taking pictures with different settings that are more and less than the cameras automatic metering suggests. One of the exposures will provide the best hippopotamus pictures.

Most digital cameras have an automatic bracketing mode so remember to use that in these situations and if your camera doesn't simply open the aperture up and down from the suggested setting but keep the shutter speed constant.

The Luangwa valley in Zambia is an area that provides some of the highest concentrations of hippo in Africa and they congregate in large numbers in the Luangwa river, some pods being more than 100 strong. If you want to see hippo, this is the best place to go.

They are found in most of the national parks in Africa but they are extinct in the Nile where they used to flourish.

The Most Dangerous Animal in Africa

Not the lion or the crocodile. They may look cute and cuddly but hippos kill more humans in Africa than any other animal.

They are only protecting their own territory and when you have canine teeth that are 50 cm (20 inches) long and a bulk of up to 3200 kg (7000 lb) you will sometimes do that too well against humans and that can cause fatalities. Never get between a hippo and the water.

And if you want to try and outrun one you will come off second best too. They can run faster than a human on land even with all that bulk.

More hippo pictures and information at Wikipedia, the free encyclopaedia...