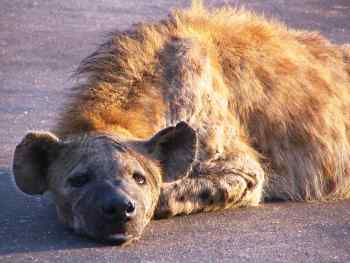 Taking hyena pictures on an African safari is not too difficult as they are reasonably common. You will normally spot them walking purposefully along the road or taking a nap out of the midday sun.

Hyenas have a bad reputation as thieving scavengers and deservedly so. They regularly steal food from cheetah, leopard and even lion if there are enough of them to intimidate the big cats.

The spotted hyena is also a predator in its own right and doesn't only rely on scavenging to fill its belly. They hunt in packs and will chase a victim until it is exhausted and then bring it down.

Often depicted as cowardly, they find strength in numbers and have been known to drive lions away from a kill when there are enough of them. They fight a constant battle with the big cats and the tables can easily turn as the hyena photo here illustrates with the lion chasing hyena away from its giraffe kill 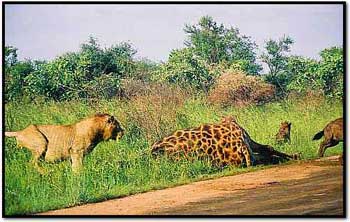 They also squabble amongst themselves when they feed and the noise they make often attracts other hyena or lion which leads to more fighting.

Hyena are very territorial and will ferociously defend their patch of land against other clans.

They have the strongest jaws of any mammal and can happily crunch through bone and amazingly even digest teeth, hooves and horns.

The females dominate the males being larger in size and more aggressive. She gives birth to pups after an unusually long gestation period which sees them born with open eyes, milk teeth and canines already intact.

Within days of birth the battle for dominance begins between siblings of the same sex with the stronger of the two keeping the weaker one from nursing until it eventually dies from malnourishment.

This sibling rivalry kills an estimated 25% of all hyenas in their first month but it ensures that the survivor grows faster and stronger. There is no such competition between siblings of the opposite sex.