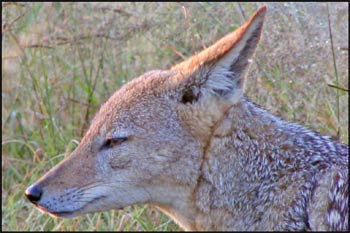 I took these jackal pictures on safari in the Kruger National Park in South Africa early one crisp May morning. He was poking around scavenging for food as black backed jackals tend to do.

They aren't fussy eaters making a meal of insects, snakes, birds, reptiles, fruit berries, grass and contrary to popular perception they are also accomplished hunters taking down small antelope such as dik dik and impala.

You are very likely to find them hanging around a kill made by lions or hyenas waiting for an opportunity to dart in and steal a morsel but I have seen them hunt wildebeest calves during the birthing season so scavenging is not the only means to fill their every hungry stomachs.

Jackals are very territorial and when you see them patrolling their patch of land they will often scent mark the area with urine and faeces to warn away other jackals. They are one of the few mammalian species to mate for life and the pair will hunt and defend their territory together. 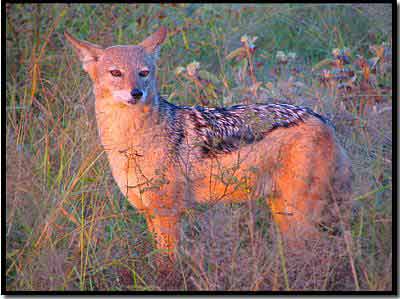 They raise a family that averages between two and four pups and sometimes as high as six.

The pups develop at a rapid rate being allowed out of their den at three weeks for a bit of rough and tumble with their siblings which prepares them for the life of hunting and scavenging to come.

They are suckled and fed regurgitated food until the age of two months and by the third month they follow their parents around to learn the extent of their territory and the art of hunting successfully.

By six months they can provide for themselves but they stay with the family and sometimes even help with raising their brothers and sisters by bringing food and taking on babysitting duties.

There are three different species of jackal animal found in East Africa and you have a good chance of getting jackal pictures of them if you go on safari in the Serengeti or Masai Mara.

Jackals are very resourceful and cunning but they do have predators like leopard, hyena and eagles (especially the pups) to contend with to survive.