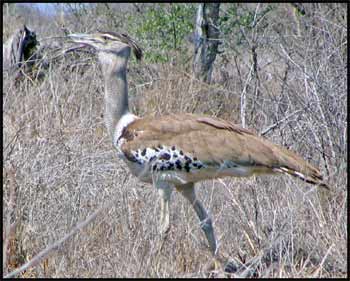 The Kori Bustard is a huge bird which stands about 105-135cm (41-53 inches) tall. It has a dark crest, a barred grey neck, brown feathered back and only the three front toes on each foot. The male is larger than the female and can weigh up to 18kg.

Where To Look For This Heavyweight Bird

I have seen this hefty bird on safari in the Kruger National Park a few times. Unfortunately their numbers have been greatly reduced by loss of habitat and they've also been shot out in some areas.  However, they are still distributed widely in game parks, from South Africa to north Ethiopia.

Their habitat is dry thornveld, grassland and semi-desert, usually near the cover of trees.

These birds don't mess around - they walk rapidly across their terrain and will seldom take to flight, except when under serious threat.

If you are lucky enough to see them during courtship you can get some unusual photographs of the male ballooning out his breast feathers. The female will lay between one to two eggs and the male doesn't participate in their incubation

Apparently they also have a proverbial sweet tooth as they seem to be fond of the gum of acacia trees.

Looking for more Kori Bustard pictures? iStockphoto is a good place to search...