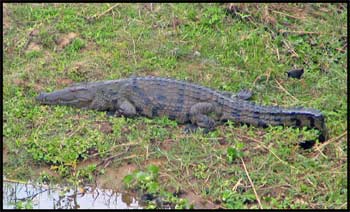 Just how large is the largest crocodile? Crocodiles as we know them today are one of the closest relatives of the dinosaurs (along with birds). No wonder then that they can get pretty big.

Fossils show that the “forefathers” of today’s crocodilians (crocodiles, alligators, caymans and gavials) grew up to 15m/50 feet long, more than twice as long as any of the biggest crocs living today!

For clarification, the alligator’s snout is rounded, where crocodiles have a long pointed snout.

In America, for an alligator and crocodile of the same length, the latter is two-thirds the weight of the former, and can move much more quickly.

Today there are 12 species of crocodiles, living in tropical countries throughout the world:

Look At Them Grow!

When born, the Nile Crocodile is less than 30cm long. Growth is about 27cm per year, but less after the 7th year.

Some species are sexually mature at 7 years, others only after 10 or even 12 years. Interestingly their sexual maturity is determined by their size, not their age.

The Nile crocodile can get more than 100 years old if all circumstances are favourable.

The Nile crocodile is found in most parts of Africa south of the Sahara desert, so you can go in search of the largest crocodile in most game reserves.

Rumour has it that the crocs in the Selous Game Reserve in Tanzania are super-sized and I have also seen some giants in the Kruger National Park, South Africa.

Crocodile pictures taken of the giant reptile on safari in Africa...