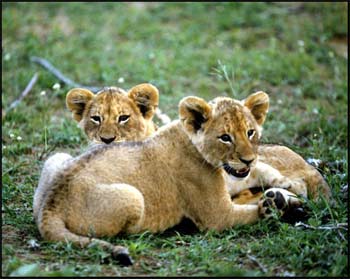 Lion cub pictures are a great prize on safari if you can get them. The cubs tend to be far more animated than the adults during the day so your pictures of them should show a little more action.

They are extremely playful if not a little hyperactive so you will have lots of opportunities to take baby lion pictures displaying interesting behaviour as they interact with each other and the adults. Their curiosity is insatiable.

Lion Cub Pictures on Safari - Where and How

Once again the Masai Mara and Serengeti parks come to the fore as one of the best safari places to get lion cub photos because of the great visibility on the open plains. Etosha in Namibia has the same visibility advantages.

I have encountered and photographed lion cubs in the Kruger National Park so it can be done but often they are obscured by long grass or bushes which is not ideal.

When composing your lion cub photo make sure that you always keep the eyes in focus. There are exceptions to this rule but for the most part it's a good practise to follow. 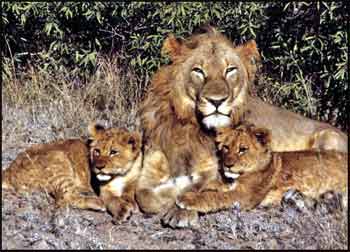 And be prepared to snap interaction photos when they happen, and they will because lion cubs are never still as they chase and spar with each other and the adults, climb trees and run around.

It's natures way of preparing them for the time when they have to catch their own food and fight for survival in a pride.

The lioness leaves the pride when she is ready to give birth to a litter of between two and four cubs. They are born blue eyed and blind with a pale brown coat of spots and stripes weighing a tiny three to four pounds.

It will take two or three months for their blue eyes to turn amber and at around that time they are able to walk fairly well and the lioness introduces them to the rest of the pride.

Infant mortality is high for lions with less than half surviving past their first year of life with more male than female deaths probably because the males seem to be more active and adventurous which puts them in danger more often.

Male lions are driven away from the pride by the dominant male when they reach sexual maturity at about 30 months of age. They often form a coalition with other male siblings from the same pride until such time as they are ready to oust a dominant male and take over his pride.

Lion cub pictures and photography advice at the Photographytips.com website...