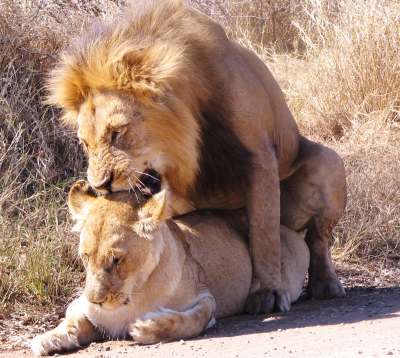 It is not that unusual for safari goers to obtain a lion mating picture. Yes, you need a stroke of luck, but as the mating process of lions lasts for up to four days during which they don't really move around geographically, your chances of spotting this episode are increased.

I was lucky enough to come across a mating pair of lions while on safari. Sure enough, they stayed in the same area (50m radius) from at least 11am to 5pm. I took the picture above during one of the 4 mating sessions I was able to observe during a 2-hour period.

The ABC of Lion Mating

When a female lion comes into oestrus, the first male to find her - there are sometimes two or even three males heading up a pride - courts and mates with her, usually secluded from the rest of the pride.

A male may mate with all the females in his pride. If there is more than one mature male in the pride, they can all mate with any female and are usually respectful of each other’s choice.

Copulation takes place every 10 to 25 minutes and lasts for about 20 seconds at a time. It is initiated by both male and female, but seemingly more often by the female who gets very energetic during her oestrus.

Lions mating is a noisy affair with lots of growling, meowing and snarling sounds. Afterwards the female usually rolls onto her back to lie like that for at least a minute or so.

In between they practically ignore each other but at the same time, the male ensures he stays very close to the female. He wants to make certain she doesn’t “get away” and that his genes are passed on successfully.

Eventually the frequency will reduce and finally end when the male and female respectively walks off to join the pride.

If mating failed, the lioness will come into oestrus again in 16 days. If successful, a gestation of 3.5 months follows.