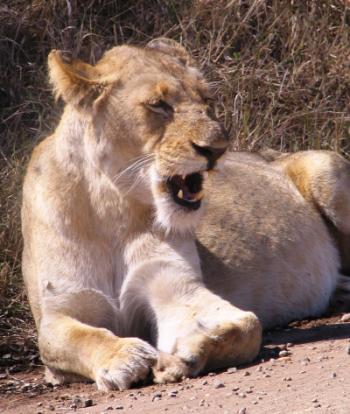 By no means dainty and small-boned, as can be seen in the lioness picture below, the queen of the jungle is a formidable animal.

Unlike our human "caveman" inclinations, in the lion world it is the females who are responsible for bringing home the bacon. Or the venison, for that matter.

A number of lioness from a pride will go out to hunt together, primarily at night but also during the day. They will take on prey small (e.g. impala) and large (e.g. buffalo), depending on the circumstances and opportunities.

Once the kill has been made, they have to stand back as the male gets to eat first. After that it's their turn and last, the cubs. It seems cruel that the kids have to wait till last, but the females have to remain strong and capable to hunt. 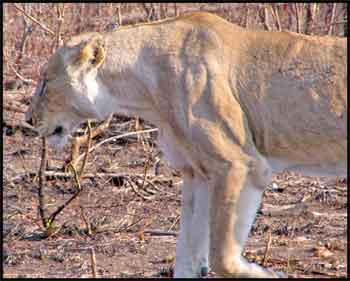 In nature the rules aren't always followed however. We recently saw a kill take place in the Kruger National Park, South Africa, which must have been an opportunistic and impulsive act.

It was about 9:30am when a pride of about nine females and youngsters were casually crossing a dry riverbed.

All of a sudden we heard a commotion between the reeds and we saw impala scattering all over the place.

A minute or so later we found with our binoculars, a female feasting between the reeds.

In this case, the prey was small and the male was not present to eat first. I guess it's a case of "what he doesn't know, won't hurt him"!?

The rest of the females and cubs got their turns too ... due to restricted view, we have to assume the one who brought the prey down was the one to eat first.

The stability of a pride is attributed to the females. Males come and go about every two years, but the females will remain together for life and care for one another's cubs.

Teenage lionesses will often "baby sit" while the adults go on a hunt.