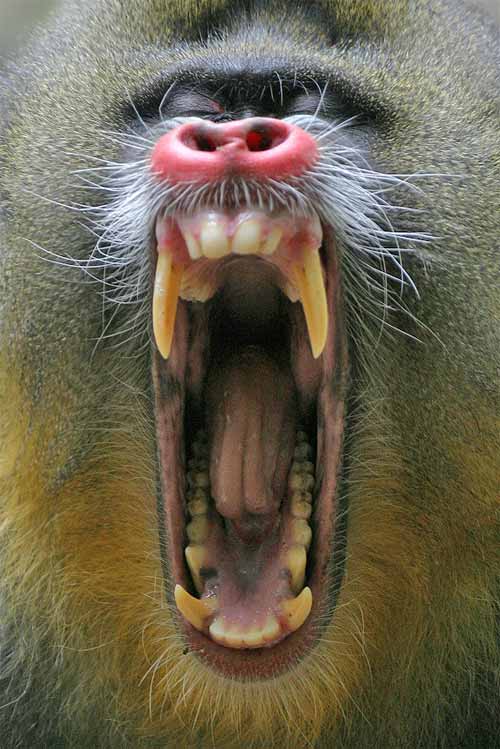 The male mandrill has unique colouring on his face and rump to advertise his masculinity to females and to intimidate other males. The huge canines seen projecting in this picture also help in the intimidation stakes.

These primates are found in the equatorial rain forests of West Africa in Guinea, the DRC (Congo), Gabon and South Cameroon.

They look a lot like baboons but actually fall into a seperate scientific class along with only one other species, the drill.

Despite their large teeth, mandrills are omnivorous and they eat fruit, grasses, roots, tubers, shoots, bark and herbs. They are also partial to insects and small animals like snails, worms and ants.

They find food by foraging on the ground and sometimes up in the trees but they are primarily terrestrial and will retire to the trees at night to sleep.

The troops that they live in can number up to 45 individuals and the several females with their young are led by single dominant males.

Their primary predators are leopard and in some cases cheetah and of course man has hunted and destroyed their habitat by deforestation so that they are now classified as vulnerable with numbers continuing to fall in the wild.

Females carry their babies for between five to seven months before giving birth to a single infant. Twins are rare in the wild. The babies are born with their eyes open and with a covering of fur and they are immediately able to cling to their mothers while she moves around.

Bonds are strengthened by grooming and they last into adulthood with daughters and until sexual maturity with males.

Because of their low numbers and where they are distributed in Africa it is difficult (but not impossible) to see them on safari so your best bet if you want photographs of them would probably be your local zoo.

They can live to the ripe old age of 40 in captivity but in the wild life expectancy is around 25.