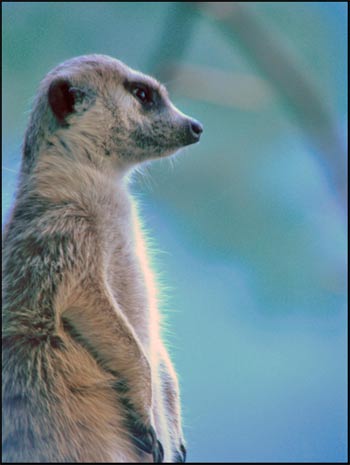 You can get relatively close to take your own meerkat photos especially in reserves where they have been habituated. They are quite animated, thereby providing ample opportunity for some great meerkat pictures.

These lightweights (620-960 grams/0.5-0.7 pounds) are also known as the grey or slender-tailed meerkat, part of the mongoose family, or the suricate.

They are highly sociable, living in colonies of around 10 up to as many as 50. Their burrows have many entrances and can be recognised by the mounds of excavated earth thrown up beside it. Often they will move into disused warrens of ground squirrels or old termite mounds.

When the group is out foraging for food, chattering constantly, there is always at least one meerkat standing on its hind feet on top of a stone or termite mound on the lookout for eagles and large hawks.

They eat mainly lizards and insects but also birds’ eggs, mice and the roots of some plants.

They might be small, but are quite feisty as they will fight poisonous snakes like cobras, and regularly kill and eat poisonous scorpions.

Where To Find And Photograph Meerkat

Meercat can be found in the drier regions of southern Africa, e.g. the Kalahari (Kgalagadi Transfrontier Park in Botswana & South Africa), the Karoo (Mountain Zebra Park in South Africa), Namib (Namibia) and Swaziland.

They are diurnal meaning your chances to spot them and take a meerkat picture or two in daylight are good. They are slow starters – it seems they have to sit and “thaw” a bit when they come out in the morning, before they go about the day’s business.