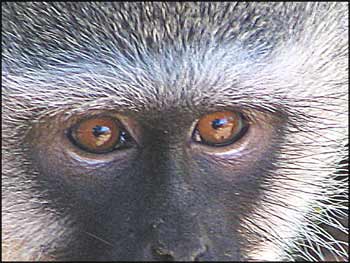 Monkey pictures opportunities on safari will present themselves often and if you spend some time with them you can get some fantastic photos. They are hard to pin down though because they are always moving around so you need a quick eye and trigger finger and be prepared to delete many of your attempts.

There are about 160 species worldwide and in Africa you can take monkey photos of baboon, vervet, colobus, mangabey, mandrill, sykes, guenon, macaques, blue and red-tailed monkeys on safari.

Because of their brazen behaviour and wide distribution it is easiest to get monkey pictures of baboon and vervets while some of the other species spend a lot of time high in the treetops which makes things more difficult. 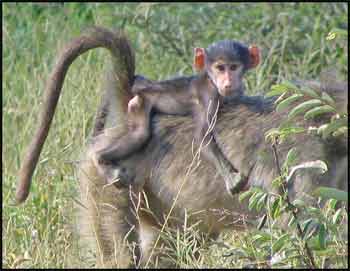 But most African monkeys spend a reasonable amount of time on the ground and it's for this reason that their tails are not as prehensile as their cousins in other parts of the world. They use it primarily for balance and not as a fifth hand like New world monkeys.

The fact that they have tails is the distinguishing characteristic between them and the apes (gorilla and chimpanzee).

Monkeys breed at any time during the year and they normally give birth to one or two young after a gestation period of between four to eight months.

Daughters normally remain with the family group for live while the males leave during adolescence to form their own groups or live bachelor lives.

Life expectancy for these fascinating animals is relatively long as compared to other mammals and they have been known to survive for up to 50 years in captivity.

The forest dwelling guenon and colobus monkeys are endangered because of the destruction of their habitat through deforestation and the fact that they are hunted for their pelts.

Amazingly, new species of monkey are still being discovered in Africa with the most recent one being found in Tanzania in 2005 called the highland mangabey but there are only an estimated 1000 of them left.