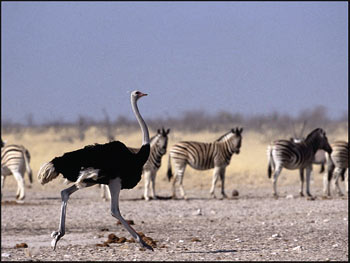 Ostrich pictures on safari will often have grazing animals like zebra and antelopes in the background because they tend to travel together.

With their excellent hearing and eyesight they serve as an early warning system for the grazers against predators like lion and leopard.

Interestingly, they have the largest eyes of all living land animals with only whales beating them in the peepers stakes.

They are capable of running at 40 mph (65 km/h) to escape an attack and they have incredibly powerful legs which can administer a fatal kick to predators.

Males are larger than the females and can weigh up to 156 kg.

Distribution - Where Can You Get Ostrich Pictures?

They are still reasonably widely distributed in Africa so you will have ample opportunity to take ostrich pictures on an African safari. They occur in the savannahs and semi-deserts in Northern, Eastern and Southern Africa including Kenya, Ethiopia and Somalia.

They were once plentiful in the middle east but they are now extinct in that area.

I always do a double take when I find them in the wild because I am used to thinking of them as domesticated birds because they are farmed extensively in over 50 countries worldwide for their feathers, eggs, hides and meat.

In the wild they feed mainly on plants, seeds and occasionally on locusts. because they lack teeth with which to grind their food they swallow pebbles which aids digestion in their stomachs. 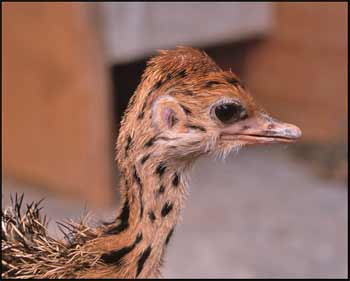 An ostrich nest is not really worthy of the name. All it consists of is a small depression in the ground scratched out by the female ostrich in which she lays between sixteen to fifty-five eggs.

Each one can weigh up to 1.4 kg which makes them the largest eggs in the world but relative to the size of the bird that lays them they are the smallest.

The eggs are very strong and can support the weight of an adult human male standing on them. I know this for a fact because I have done exactly that on an ostrich farm in Oudshoorn, South Africa.

Incubation is done by the female during the day and the male at night which is one of the reasons why the male has predominantly dark plumage and the female dun.

The babies will hatch after 35 - 40 days and the male will shoulder most of the parental duties.

African bird pictures of owls, vultures and flamingos taken on safari in Africa...