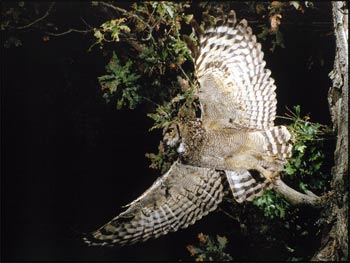 Owl pictures depict an amazingly engineered bird specifically designed for doing what it does best. Hunting...

This bird is a supreme predator, using exceptional eyesight, acute hearing, its powerful talons and beak and the ability to fly silently to hunt as effectively as possible.

Where To Get Owl Pictures On Safari

Owls are widely distributed being found on every continent except for Antarctica.

I've photographed a number of owls on safari in the Kruger National Park in South Africa mostly roosting in trees during the day and at floodlit waterholes at night. Most owls are nocturnal birds so are much more active in the dark. 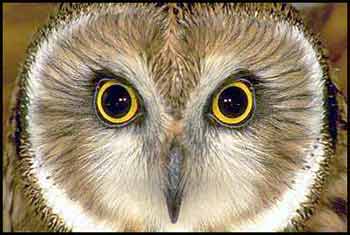 You will find them in all of the game reserves in Africa but because they operate mostly at night it makes them much more difficult to find and photograph.

Dawn and dusk will provide your best times to find them and take owl pictures.

Their eyes are incredibly sensitive to light to help them hunt and can account for up to five percent of the birds body weight. Their eyesight is fifty times better than that of their favourite prey, the mouse.

Due to the fact that they can't swivel their large eyes they have adapted an extremely flexible neck which because of the high number of vertebra (14) means they can turn their head through a range of 270 degrees. But not 360 as the myth would have us believe.

To protect their remarkable eyes they have three eyelids, one upper, one lower and a nictitating membrane that closes diagonally across the eye.

Hearing a pin drop is childs play for an owl. The range of audible sounds that they can pick up is similar to ours but it is much more acute at certain frequencies which allows them to detect even the slightest movement in the undergrowth.

The owl has a "silent mode" to prevent prey from hearing impending doom from arriving overhead. Comb-like feathers on the leading edge of the primary wing feathers breaks down turbulence into smaller groups and effectively muffles the air rushing over the wing.

Owl pictures and information at the owl pages website...