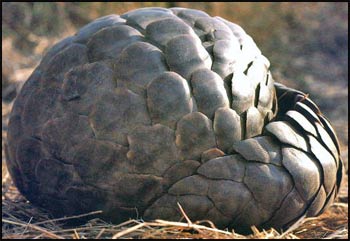 If you’re on the hunt for pangolin pictures you should head to the woodland, shrub land and bush land areas of East and Southern Africa – and occasionally you might get lucky in grassland areas.

It is an unmistakable animal: scaly and of light brown colour. They're 35-60cm/14-27inches long with a head that seems small in proportion with the rest of its body, rounded off by a thick scaly tail.

This toothless mammal walks slowly, often on its hind legs only.

Only one young is born at a time which is then carried around on the base of the mother’s tail.

Where To Find and Photograph Them

The Cape Pangolin (discussed here), also known as the Scaly Anteater, is found in most Eastern and Southern African countries.

They are solitary and nocturnal – at night it forages about for ants and termites to slurp up with its 30cm/12 inch-long sticky tongue. Sometimes it will break up the nests with its well-developed claws to get to its food.

Should you ever spot one of these animals in the wild count yourself extremely fortunate as they are endangered and very rarely seen.

If you are lucky enough, your picture might be of it rolled in a tight ball; this is its defence mechanism.

Distribution of other species in Africa: