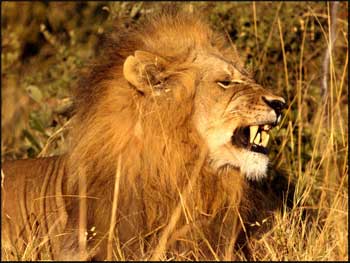 To obtain a picture of roaring lion is no easy feat. The times I've heard a lion roar (in itself an incredible experience, but not very suitable to photography) were usually at night and unless you're out on a night drive the chances to capture it on film are virtually zero.

So to increase your opportunities of spotting a roaring lion, try to book a night drive on safari. The game rangers usually have a pretty good idea where to find lions as they keep track of pride movements.

However it is not impossible to see a roaring lion during daylight hours. Talking to travelers, some have been lucky. One such sighting took place in Namibia, where the tourists were treated to a male lion roaring at 10:30am, right next to the road, and they could take a few photos.

Safari guides often use the roars made during the night and early morning hours, to find lions the next day. It is not too easy as sound travels quite far at night and sometimes it is difficult to establish the direction the roars come from.

The reason a lion will roar is usually to find their companions whom they might have temporarily lost, or to announce its territory and strength to rivals.

Lions sometimes roar in chorus - they can distinguish between large and small groups by their roaring. They can also tell apart the roars of companions and strangers.

It is not only the male that roars although theirs is louder and deeper than the female's.