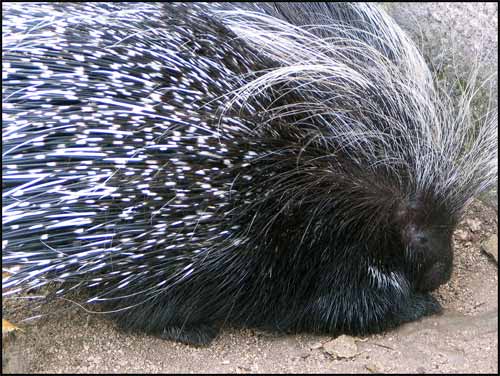 It’s good to know a few porcupine facts – it will help you to find them if you know more about their behaviour.

Chances are you might see some porcupine quills lying on the ground when on a game walk during safari. It has become a popular interior decorating accessory, even lampshades entirely made out of these beautiful black and white quills.

It is the largest rodent in Africa. Large for a rodent but the porcupine animal is still small compared to some African animals, weighing less than 30kg/65 pounds.

The porcupine is an herbivore, eating plant matter like roots, bulbs, berries and tree bark. Sometimes it will eat old bones to rectify a calcium or phosphate deficiency in its diet.

Particularly hungry or inquisitive lion and leopard are the main enemies of the porcupine. You might have seen on some documentaries, the signs of a failed lion attack as it sports one or two quills stuck around its front legs or face. This is painful and can cause fatal infection.

When threatened, the porcupine wags its tail to produce a rattling noise, simultaneously raising the sharp 40cm/16 inch-long quills on its back and sides.

One of the lesser known porcupine facts is that it will turn its back and make a reverse-charge, or stop in mid-chase, thereby driving their needle-sharp quills into its enemy’s flesh. It doesn't "shoot" the quills as many believe.

They live in pairs with their 1-4 offspring and keep to the same burrow. The quills of baby porcupines are soft and flexible at birth.

Where to Find and Photograph the Porcupine

The porcupine is commonly found across Eastern and Southern Africa. Because the porcupine is nocturnal it is hardly seen during daytime when they stay in their burrow. However, they do sometimes come out during the day to sunbathe.