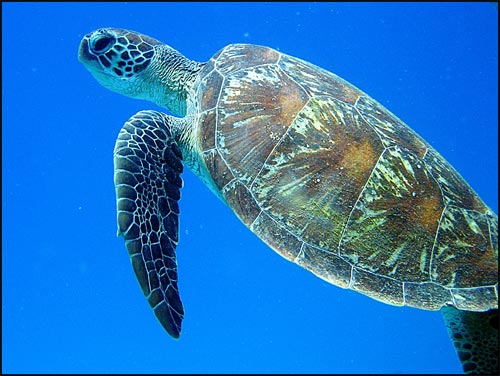 To obtain a sea turtle picture on an African safari, you will have to venture to coastal areas (try South Africa & Kenya) at a certain time of year as turtles live in the ocean and only come ashore to lay its eggs.

It is common practice for turtles to nest in summer. The female will emerge from the ocean at night to lay her eggs. Before she goes to her nest, or starts making a nest, she will pause in the shallow waters on the beach to see if any danger lurks.

Next, the prospective mother will find a suitable site for her nest, then proceed to dig a hole large enough for the approximately 100 soft-shelled, white spherical eggs. This is one of the most opportune times to get a sea turtle picture on land. She will then cover the nest with sand and returns in an exhausted state, to the sea.

After roughly 2 months, the baby turtles hatch and scramble out from under their sandy nest, heading for the sea as fast as their little legs can carry them.

This is the opportunity the ghost crabs wait for – they will kill almost 12% of the hatchlings. Once in the ocean, there are other predators awaiting their tasty treat. After all the trouble gone to by the mother(s), it is estimated that merely 1 or 2 hatchlings out of every thousand will survive to adulthood.

During their youth, young turtles mostly drift in the open sea and eat floating organisms.

As they get older, they eventually swim closer to the coasts and start feeding on small sub-tidal animals.

The females are thought to return to the beach where they were hatched when they are ready to lay eggs of their own (anything from 4 to 15 years of age).

The following species are found in the waters off the east coast of southern Africa:

Between end October and January, the Leatherback and Loggerhead turtles come ashore in northern Natal/Maputaland, South Africa, to lay their eggs. During January and February, the baby turtles hatch and head for the sea.

The Hawksbill, Green and Olive Ridley turtles are all protected in Kenya under a volunteer program. Opportunity to view and take an amazing sea turtle picture is available on the Mombassa coast.

Scuba diving is popular along the north-east South African and Mozambican coasts and may offer underwater photograph opportunities of turtles.