You are not very likely to return home from your safari with packs of snake pictures, even though there are more than 160 snake species in Africa. These reptiles are not seen by travellers very often.

Most often, if you're lucky enough to see any at all, you'll catch a glimpse of one gliding across the road as the safari vehicle approaches.

Some of the more common species and the ones you are most likely to come across and take snake pictures of on an African safari, are:

Should you plan to venture into the bush on foot, it's a good idea to wear boots and ankle protection (and of course your camera to take a photo). Snake behaviour, however, is usually to slither out of your way long before you get to them.

I found out while hiking the Fish River Canyon, Namibia, that you should keep your eyes open for snakes whenever you're in African nature. One of the hikers in our group almost stepped on a horned adder. 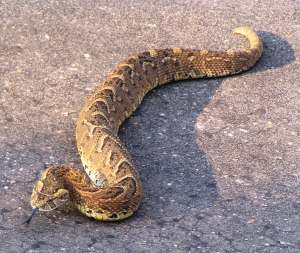 There are a number of snake and/or reptile parks in southern and eastern Africa, which you may want to include as part of your safari trip. The problem is that snakes are often kept behind glass, making photography difficult.

It is a good place to be able to get a good look at all sorts of snakes, though, and sometimes talks and demonstrations are given. A few are:

The ultimate prize is to be able to take snake pictures in the wild. Remember two things:

One -- It might be venomous! (If you don't know much about snakes, it's better to treat them as venomous. If you're on a guided safari, your guide will be able to tell you what species it is, whether it's venomous or not, as well as a bit about their diet and behaviour.)

Two -- Be very quick on the shutter. As a rule snakes don't hang around to be photographed. It may be a good idea to set your camera on continuous shooting mode, more regularly used for sports photography.

I was lucky enough to spot a puff-adder on a recent safari trip and add a photo of it to my collection of snake pictures. Although it did disappear off the side of the road and into the bush, it did so slowly (they are quite lazy).

I have seen snakes high up in trees, a bit easier to spot during night drives as the spotlights make them quite visible, compared to daylight.

If you're ever in Etosha National Park, Namibia, keep a lookout for the "twig snake" in dry trees during day time. They look like just another branch and make interesting snake pictures.

Be sure to have a good zoom lens handy.