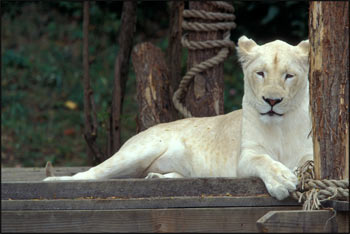 Although very rare, especially in the wild, it is possible to get a great white lion picture if you know where to go.

In spite of being recorded (or rumoured) as early as 1927 in the Kruger National Park, South Africa, white lions first really came to the world's attention in the 70's when two were found and photographed in the adjacent private game reserve Timbavati.

During the 70s and 80s a number of white lion cubs were born into prides in the Kruger National Park. Unfortunately I was never lucky enough back then to see one there.

Due to their rarity, all the white lions were removed from their natural habitat and sent to captive breeding/hunting programmes as well as zoos and circuses, most famously Siegfried and Roy's magic act in Las Vegas.

After more than 12 years of extinction in the wild, a programme by the Global White Lion Protection Trust to reinstate them in the wild, was undertaken. Part of this process is undertaken at the Sanbona Wildlife Reserve in South Africa's Cape Province.

Reinstatement of a white lion pride into Timbavati area, where they first rose to fame, was done early in 2006 and seems to be a success.

During the first half of 2006, as a complete coincidence, two white lion cubs were born in the wild in Umbabat Private Nature Reserve. On your next safari, why not try your luck for a white lion picture there! It is not known that white lions are to be found anywhere else in the wild at the moment.

Why Is A White Lion White?

The characteristics of a lion is determined by genes, and it was found that white lions are the offspring of two lions who both carry the "autosomal recessive gene". It doesn't mean all their cubs will be white, but if they don't both carry this gene, there's no chance the cubs could be white.

This also means a white female can't produce white cubs unless the male she mates with also carries the recessive gene (and vice versa).

Their behaviour is no different to that of "normal" lions, and they have the same yellow eyes as ordinary lions. They do however, lack the black tip of the tail and the black patches behind the ears.

One would imagine they stand out in the African savannah and therefore struggle to hunt successfully (although good if you're trying to take a white lion picture), but rangers in the Kruger National Park found their mortality rate to be in line with normal lions. The strong social structure of lions would probably protect them to a certain extent, too.