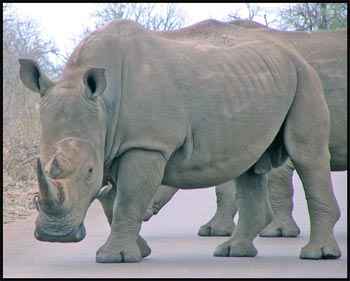 You would think that getting white rhino pictures of an animal that weighs 3.5 tons would be easy but they can be remarkably elusive on occasion.

In fact, it was touch and go in the early part of this century whether anyone would ever photograph a live white rhinoceros in Southern Africa again because they almost became extinct.

At the turn of the century these magnificent animals were completely wiped out in South Africa except for a small pocket of about ten left in Natal.

Only the drastic intervention by the Natal Parks Board to prevent poaching and conserve the species prevented them from slipping over the edge into oblivion forever.

The numbers began to increase steadily under the park boards stewardship until there were enough for translocation to other reserves. Most of the rhinos in Southern Africa today including those in the Kruger National Park originate from those last ten left standing.