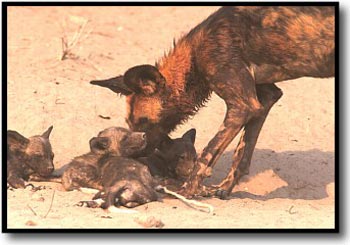 Seeing wild dog pups in any shape or form is always a blessing, because the African Wild Dog, also known as Cape Hunting Dog or Painted Dog, is the most threatened of mammals in southern Africa.

After a gestation period of 72 days, the dominant female of a pack gives birth to a litter of 6-14 pups usually late March to June. She does this hidden in a den, usually a disused aardvark burrow.

The mother stays with the pups and they suckle until about 3 weeks of age when the whole pack starts sharing the responsibility of caring for and feeding them. At this age they are still mostly of black and white colour. At about 4 weeks of age, yellow markings starts to appear and they look more like the adults.

Wild dog pups may be moved to different dens during the season as the species is nomadic in nature.

Wild dogs hunt in packs, a necessity to this smallish carnivore which would otherwise lose its prey to larger predators. They use teamwork to bring down prey as large as wildebeest and zebra.

The younger dogs are allowed to feed first, while the adults will guard the kill against any potential scavengers. The pups of up to two and a half months of age, too young to join the hunt, and their mother and/or other guardian/s will receive their food backat the den, in the form of regurgitated meat.

Where To Spot and Photograph Wild Dog Pups

Due to their low numbers, wild dogs are not often spotted. They do however occur in various game reserves in east and southern Africa. Some of the areas you may get lucky are:

They are most active in the early morning and late afternoon, also the best light for photography. Should you spot a pack, look for the younger dogs among them; or if you or the game rangers know of a den you can try for photos of the very young pups.

For more information on conservation and how to protect wild dog pups visit Save The African Wild Dog.