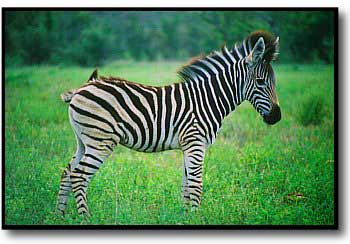 A baby zebra picture is not very difficult to get especially at the height of the birthing season when thousands of them are born at roughly the same time.

After a 12 month gestation period, the female zebra gives birth to a single foal with its own unique stripe pattern.

Once it is emerged from the embryonic sac, the foal is licked clean by its mother and will immediately start wobbling on its tiny legs.

It will then start suckling to build up strength, as baby zebras are vulnerable to predators and they need to be able to stick with their family to avoid death.

There are a few sub-species of zebra, but all of them live in 'families' of 1-6 mares (not necessarily related) and their foals, with one mature stallion as their head.

An excellent place to get opportunities for a baby zebra picture or even to witness the birth occurring is in the Serengeti in Tanzania. The peak time for zebra births is in January of each year.

Their build is slightly different, and the stripes differ in that the Mountain Zebra stripes don't meet underneath the belly, and also exclude the brown shadowy stripe that the Common or Burchell's Zebra has.

Zebra pictures of these striped ponies taken on safari in Africa...