Picture of Wildebeest, Taken on Safari 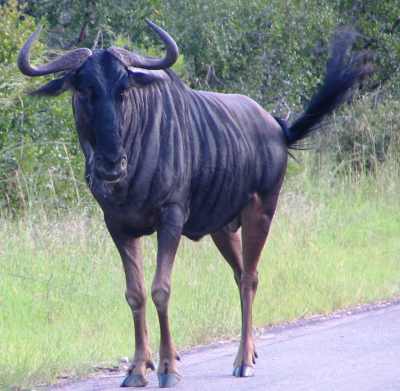 I have a great memory and picture of wildebeest on safari - the time I saw a new born wildebeest baby take its first steps. It was an absolute wonder to watch.

At first it stumbled around drunkenly but within a few minutes it could stay upright and started towards its mother. Bad luck for the jackals that were hanging around hoping for a free lunch.

The gnu or wildebeest is probably best known for migrating across the grassy plains of the Serengeti (Tanzania) and Masai Mara (Kenya) each year. They need to keep moving so that they can have sufficient grazing and water.

That is also why the baby wildebeest can walk so soon after birth. Most antelope hide their babies for a few days after birth, until they're strong enough to join the herd but new wildebeests have to stick to the herd or face death.

Blue wildebeests eat grass only and as an area dries up, they have to almost literally "follow the rains" to find adequate food.

Like most animals, males are territorial although their territory is a "space bubble" around them rather than a set geographical area. It is interesting to note that mating will only take place within this "bubble".

Where And When To Take That Winning Picture Of Wildebeest

On a recent wilderness hike that I went on, we came across the perfect picture of wildebeest in their natural habitat, grazing in the soft light of the late afternoon. Our guides referred to them as "Harley Davidsons" and we understood why as soon as the first warning call sounded. It resembles the sound of the motorcycle almost perfectly! Great video opportunity…

The most impressive picture of wildebeest, unattractive they may be, are undoubtedly the ones taken during the migration period in Tanzania and Kenya. Thousands of travelling gnu form long lines across the savannah, their dark bodies forming a contrast with the grasslands.

Within the migration period, many a photographer has discovered that great action photos can be taken when the wildebeest cross the Mara River. An unlucky few of these antelope always end up in the jaws of a Nile crocodile - another (be it a bit grim) action photo opportunity.

In most other parks they are not found in such large numbers but there you may find opportunities for a close up picture of wildebeest. They are often found grazing with zebra, and the latter animal can bring that extra dimension to your photograph.

Calves are born at the beginning of the rainy season (January/February), a good time to book a safari and try to photograph lots of babies.

It is also during this time that predators like lion and hyena gather round to catch an easy meal (unfortunately for the wildebeest, fortunately for the killers and photographers). Jackals and vultures often hang around where wildebeest give birth, as they like to eat the placenta that drops from the mother about 3 hours after birth.

I need to confirm with further research whether there is a link between rain and crazy wildebeest behaviour. I came across a bunch of frolicking, grunting blue wildebeest once just after a good downpour. It was so different to their usual demure behaviour and very entertaining!

They are similar in appearance to the blue wildebeest but have a diagnostic white tail, more hairy chest, and its mane stands upright rather than being draped onto the neck and upper body... making for a slightly more dramatic picture of wildebeest.

Their diet is a bit different too - while the blue wildebeest eats only grass; this one eats tougher food too (like bushes and shrubs) and needs less water.

The black wildebeest (also known as the white-tailed gnu) is lesser in numbers and are mostly found in South Africa, Swaziland and Namibia.